I woke up around 5 am, had some breakfast and headed to the North Shore. On my way there I picked up my friend Merve. For some reason we started to talk about the amount of calories that we burn on a surfing session, so after 3 hours in the water we ran to Killer Tacos to get two fish burritos with extra guacamole and sour cream.We were not sure about how many calories were burned  but  it seemed like these burritos were going to bring the lost calories back. Beside our table there was a 3D map of Oahu hanging on the wall.

On this map I could see all the Koolau Range and I showed Merve how much terrain I’d covered in my last flight.I looked at the map for quite a while visualizing every corner of the Koolaus and thinking on the best way to fly further along this range.

Two hours later I was at Makapuu’s launch getting ready to ride the green walls. Before I took off I helped my friend Maui Doug to clean the take off and after working with him for 20 minutes  I stole a sip of water from his bottle and left the ground. 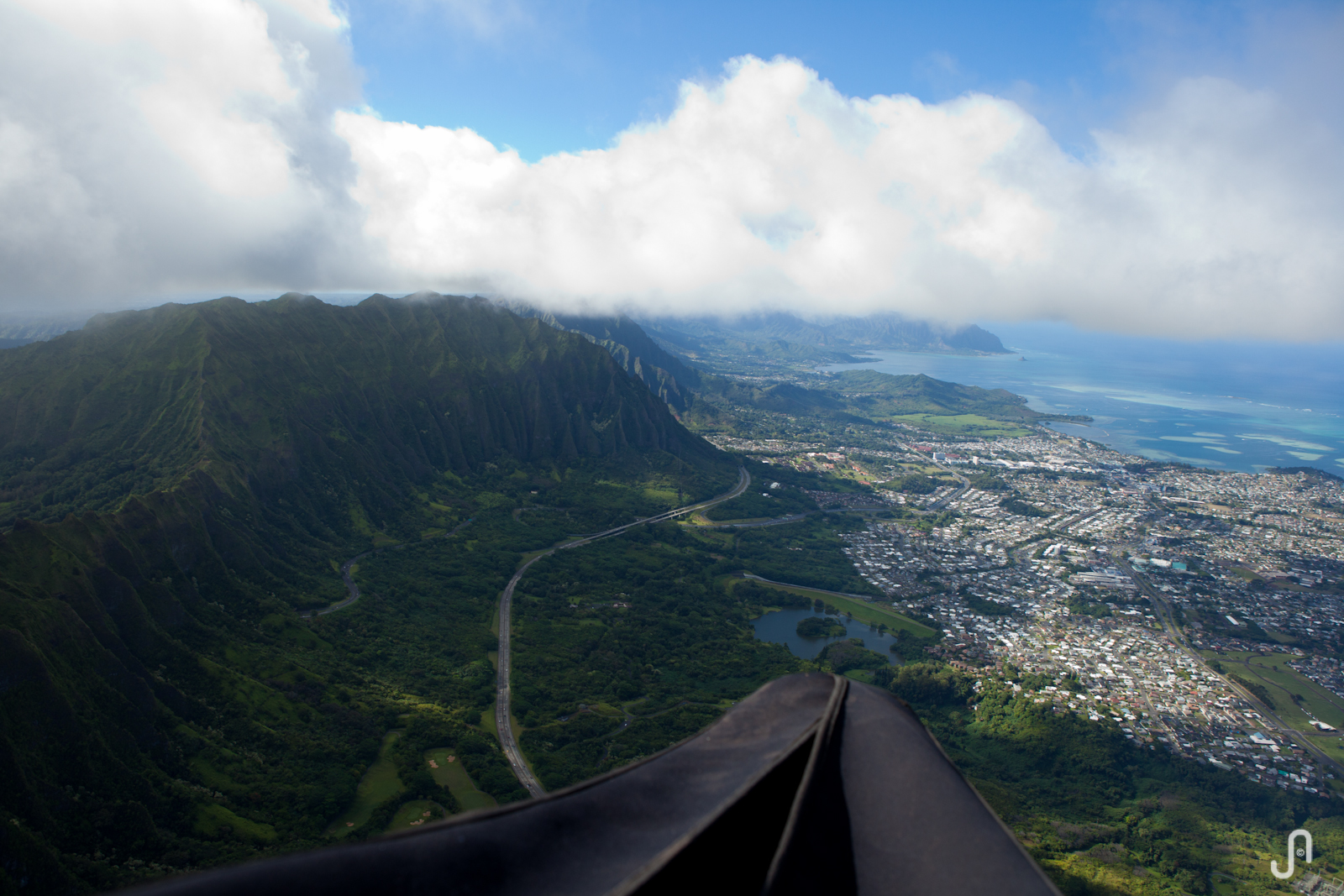 On my way to he middle of nowhere

The cloud base was not as high as the days before but the lift was good and consistent, so I flew pretty fast. Most of my flight was along the valley and not too close to the range due to the big clouds that were forming on top of it. 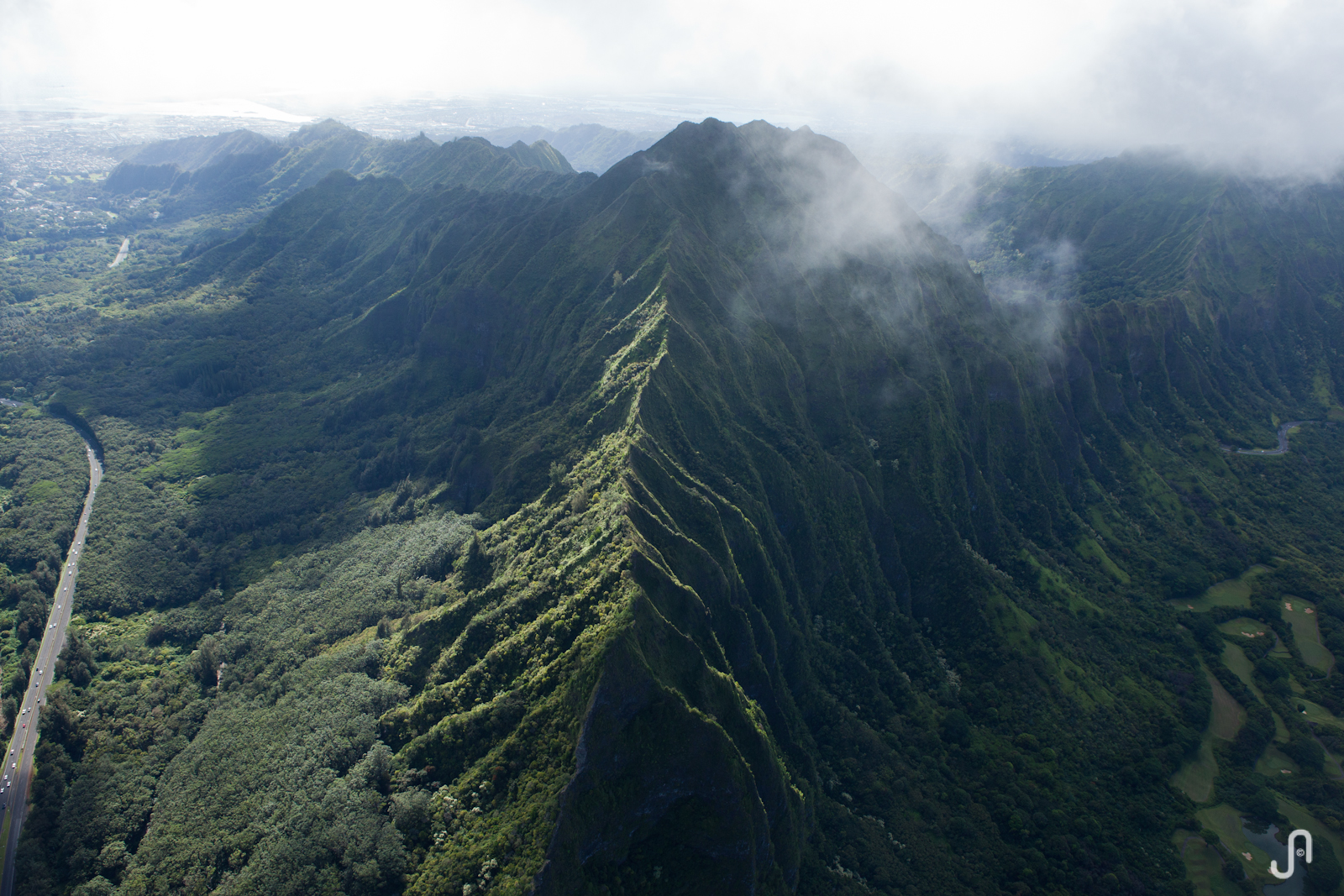 The clouds above the range kinda low

I was getting closer to the hardest transition of the whole flight when the lift started to get weaker, so I decided to get closer to the wall where I’d find good lift. Before I got to  cloud base I pushed forward to get back to the Valley but in seconds a gentle lift turned into an aggressive elevator out of control and there I was immerse in the white room.

Once inside the cloud, I didn’t have the chance to escape it. I knew that the terrain was close so after losing my bearing my best chance was to stay as high as possible. I kept going up non-stop for a while, it felt like an eternity, I thought I was going to stay in white forever when suddenly I saw a tiny blue hole. As soon as I went through this small blue window I had a 70% collapse, I stalled the glider right away but I got a 40% cravat, I looked down and I had just 80ft to  the ground. I didn’t have enough altitude to throw my reserve and my sinking rate was slow  so I have not choice but landing on that configuration. Even though my glider was stalled and cravated I had still the chance to make small corrections before I landed on a small clearance beside the edges of a 150ft tall vertical cliff . Just before I hit the ground I yelled as hard as possible to relax and empty my body. After landing I still could heard my voice echoes bouncing  along the lee side of the Koolaus.

No more than 30 seconds had passed from exiting the cloud to my landing. I knew I had no injuries, my landing was smooth enough to keep myself in one piece,anyways I stayed still for couple minutes waiting for the adrenaline to pass to feel my body.

I tried to reach the civilization by radio but it didn’t work. Surprisingly my phone had good reception so after getting in touch with the boys and giving them my location, the firefighter heli was on its way. 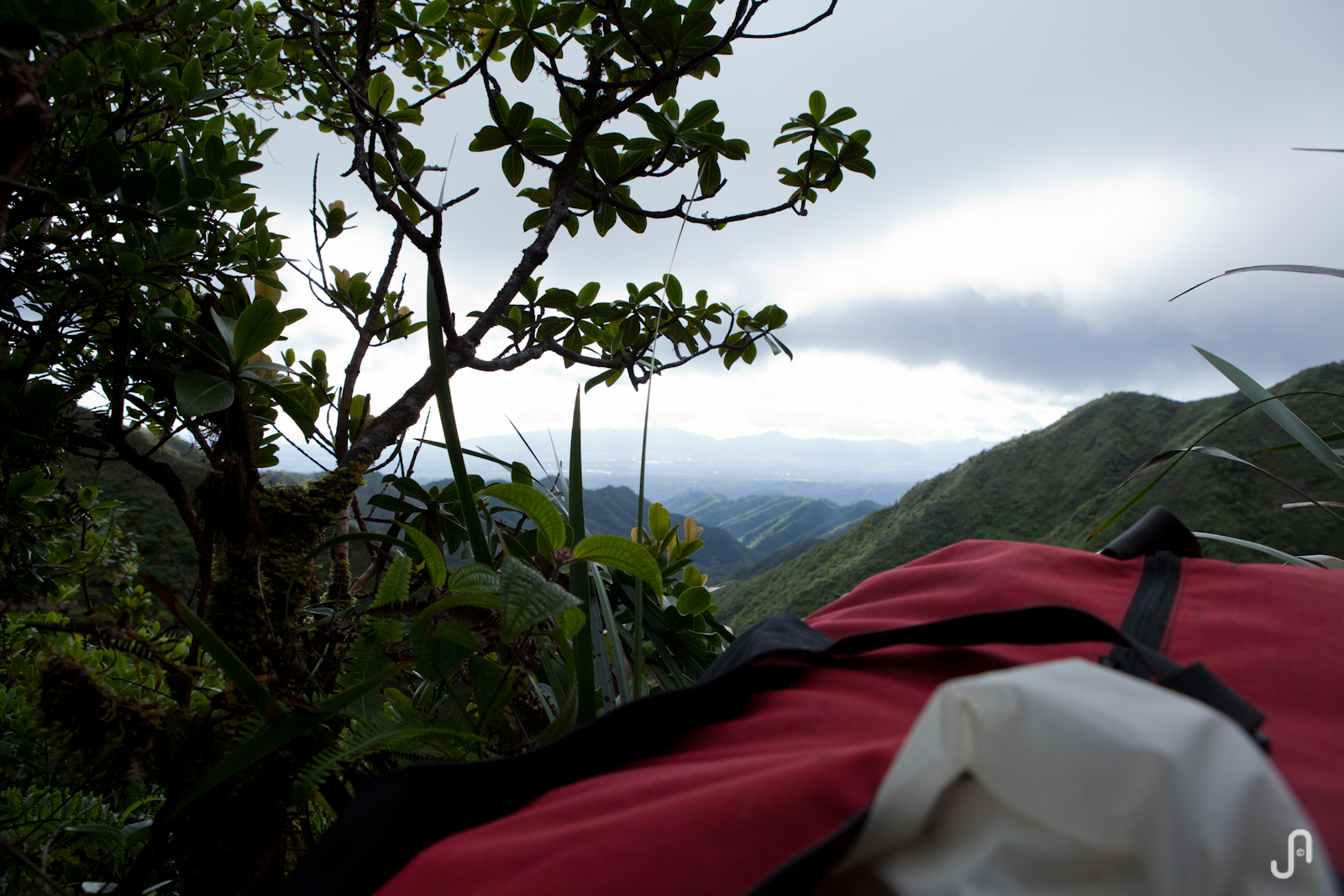 Close to my landing

The helicopter  flew around the area for about half an hour before spotting me. It was 5:45 pm, cloud base was still high and the wind was light. I received a call from the fire department asking me to start to walk down the ridge. I knew that walking down was not the best choice in this situation but well I was going to do whatever it took to get out of there. After rolling down 100ft I ended up on a hole surrounded by tall bushes and with almost not visibility. 15 minutes later I got another call from the fire department: ” Jorge the pilot reports high wind condition on the area and he’s afraid he won’t be able to get  to you today, so you will have to stay overnight, we will resume the rescue tomorrow in the morning. Please don’t move from the place you are now, we already have your location , have a good night”. What high wind?  it wasn’t a high wind situation but well I have not choice but accept the pilot decision.

At this point I knew I had few minutes before dark so I climbed out of the hole where I was and found a better spot to pass the night. I opened my glider and made a tent with it. I wasn’t hungry at all thanks to the fish burrito,  but I was extremely thirsty and had no water. Yes, I know I should bring water every time I fly, I just forgot it that day.

Before I turned off my phone (to save battery) I spoke with the boys who were planning to hike the range and get to me that night but this place didn’t have any visual access by ground so I convinced them to abort that mission. John “aka Duck” gave me the last forecast of the night: ” it does look dry at the moment but according to the radar you will get some rain between 12 and 1 am and then between 3 and 4 am, ahhh I almost forgot if you hear something weird at night those are the wild boars that live on the range just bark  and they won’t bother you”. 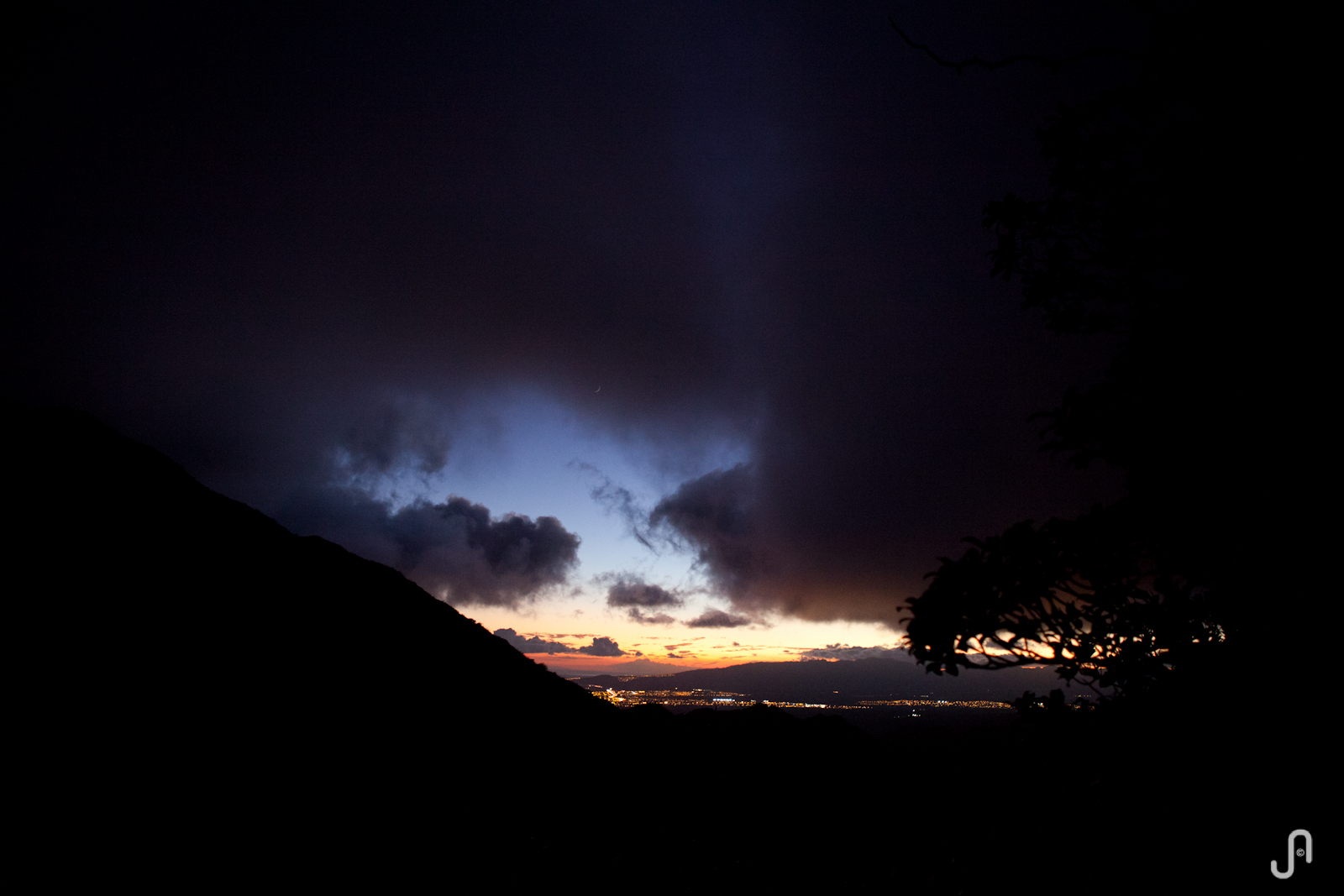 I sat down and finally had the time to appreciate where I was. It was the quietest place I’ve been in a while, the view was priceless and it was another clear night in Hawaii, so I started to enjoy my misfortune. After a couple hours of meditation, I was ready for bed.

The terrain was extremely steep so I placed myself against a small trunk to avoid sliding down. Around midnight, as John predicted, the rain showed up making my staying at the Koolaus Inn a little wet and slippery. I’d spend the rest of the night relocating my bed and barking to every little sound to keep the wild boars, that I never saw, at bay.

At first light the cloud was low and thick, the visibility was zero and the wind was blowing hard. I called the fire department to report the conditions. My location wasn’t the best to get rescued at so I decided to climb to a better place. While climbing I could hear the helicopter flying around but I couldn’t see it.

After a couple hours I reached an open area on one of the fingers that came down from the main range. The cloud had lifted, the visibility had improved but the wind was still in the strong side. This conditions were 3 times worse than the previous day. I was expecting my rescue to get delayed when suddenly I heard the helicopter getting closer I took the red bag of my glider and started to wave it non-stop. Few seconds later the pilot had spotted me, gave me a thumbs up  and left.

Five minutes had passed when I saw the helicopter coming back for me, with no hesitation the pilot hovered above my location, place one skid on the ground, and the rescue guy jumped out from the heli, helped me with my bag and that was it, I was checking out from the Koolau Inn Resort.

As soon as we made it back to civilization a big media crew was waiting for me. For the last 24 hours I had been the main headline of every TV channel on the island, so they needed to close the story with my rescue. I apologize for all the misinformation that one of my friends gave to the media calling me one of the best pilots in the world, etc, etc, etc. He really likes to be on TV and, of course, he loves me.

One of the thing that surprises me the most about my rescue was the pilot skills, I couldn’t believe that this was the same pilot that left me the day before in the middle of nowhere (and actually it wasn’t). Well, as you know it was too cloudy that my rescue got delayed. At 8 am the morning shift took over and a new, real, helicopter pilot was in charge. Ironically the same cloud that took me to that crazy place helped me to have the right pilot for my rescue.

Thanks to the fire department and the flying monkeys for rescuing me. Thanks to Ozone paragliders to built safe, solid and warm wings for camping. Thanks to all the media for transforming every small event in something massive, incredible and intense for the audience because of you I’m now more famous. Ahhh  last, but no least, thanks to the clouds for the round trip to that unique place…  see you out there