Christian and The Misty Mountain

In April 2006, my buddy Tomy and I traveled to Guatemala to meet with The Lake Atitlan, fly some tandems and  teach a Paragliding Maneuvers Clinic, better known in french as SIV. At the Guatemala City Airport, Christian was waiting for us with his small SUV and  a big smile from ear to ear. My first thought after meeting our host was that he was using some kind of stimulant to keep his energy to da max, but during our trip I’d notice that his energy was a natural gift.

We loaded the car with our heavy baggage and  headed to Panajachel.”Pana”, as the locals call it,  is a picturesque town on the shores of Lake Atitlan. Christian had his office in the main street of this town  and his house across the river, where we were staying. His house seemed taken from Alice in Wonderland, from the outside it looked like a pyramid , and  inside there was just enough room for the kitchen, fridge and beds. The walls were of stone, which Tomy climbed  every night before bed, and the garden had a couple of trees planted in perfect position to hang the hammock and take a nap after a long day of flying. Best of all was its location: far from town and away from the crowds.

Of all the things that were inside the house what caught my attention was Christian’s creative box: a lot of brushes, acrylic paints, unfinished works and one blank canvas that  had already a name. Though I had not painted in centuries, the inspiration came without warning, so I decide to ask Christian if I could put some color to the only white canvas in the house. Without hesitation he replied with laughter of happiness: it would be awesome if you paint on this canvas, but well the canvas has already been named: “Hello Grace”, so whatever you paint on it that is how it will be called. The name of this canvas was taken from a good friend of Christian, “Grace”, that at the time was in Ireland  and to whom he would dedicate this painting, but well I intervened in the process. That same day I started to put some color on what it was supposed to be “Hello Grace.”

As soon as the colorful sky started to show up in the canvas I decide to talk with Christian about changing the name of this painting, now it would be called: “Hello Grace, Good Morning Christian.” I always thought that he saw things in a different color and his morning sky looked like my painting. 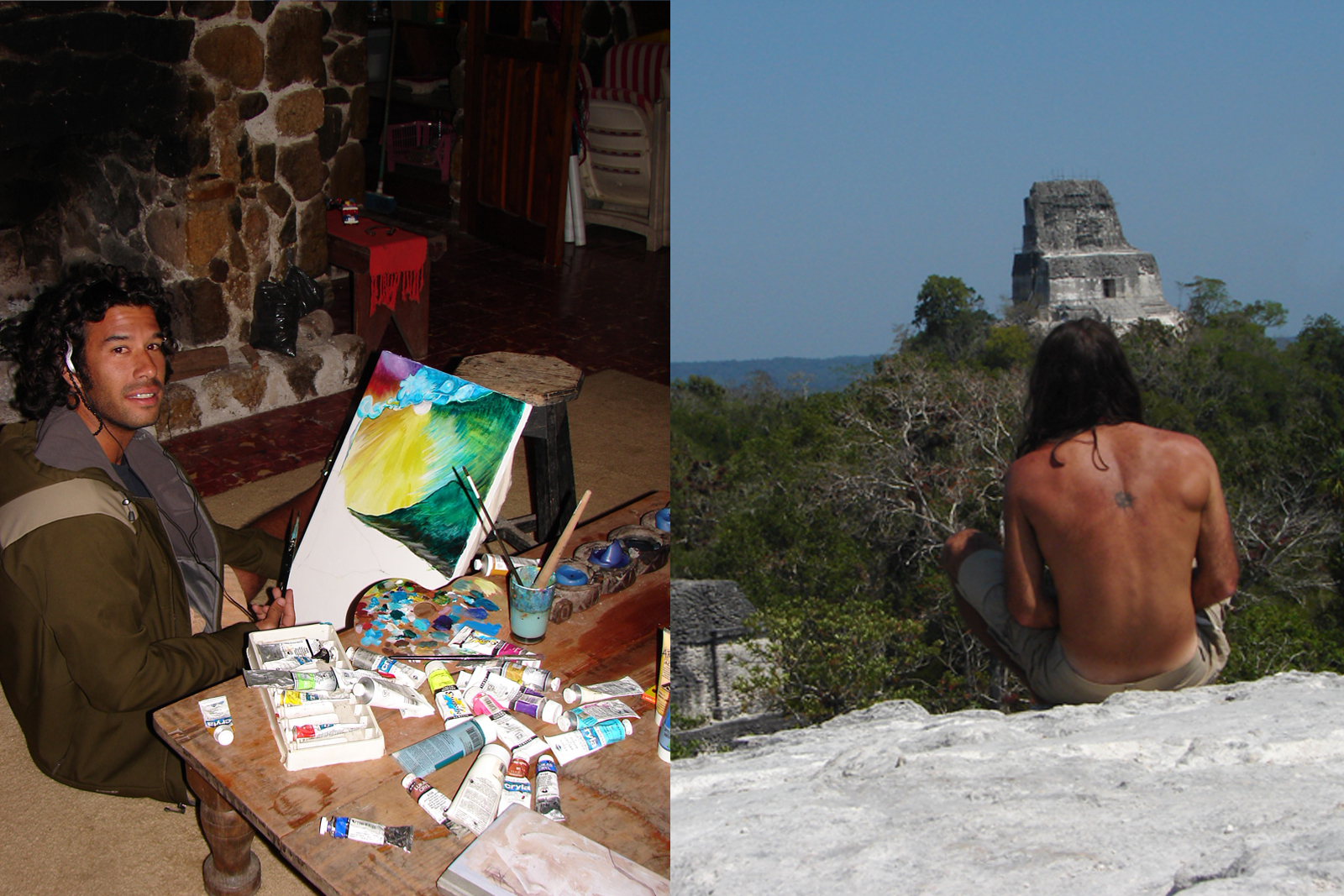 Mayan inspiration. Right: One more brush before bed, Panajachel/Left: Tomy about to take off , Tikal.

It’s been  four years since I gave the last brushstroke to this painting that  was left unfinished in Central America. During this time a lot has happened in Christian’s life: He finally opened his dreamed Coffe Shop in Panajachel “The RealWorld Café” which later became “The Realworld Paragliding” (this name comes from RealworldRecords label that belongs to his idol Peter Gabriel). His family has grown and now his son Liam and his lady Stefanie are part of the real world of Christian.

The last email he sent me came with a huge present, even though he’s been busy he found the time to finish “Hello Grace, Good Morning Christian”. He mentions that he had to add a new name to the painting: “Misty Mountain” . 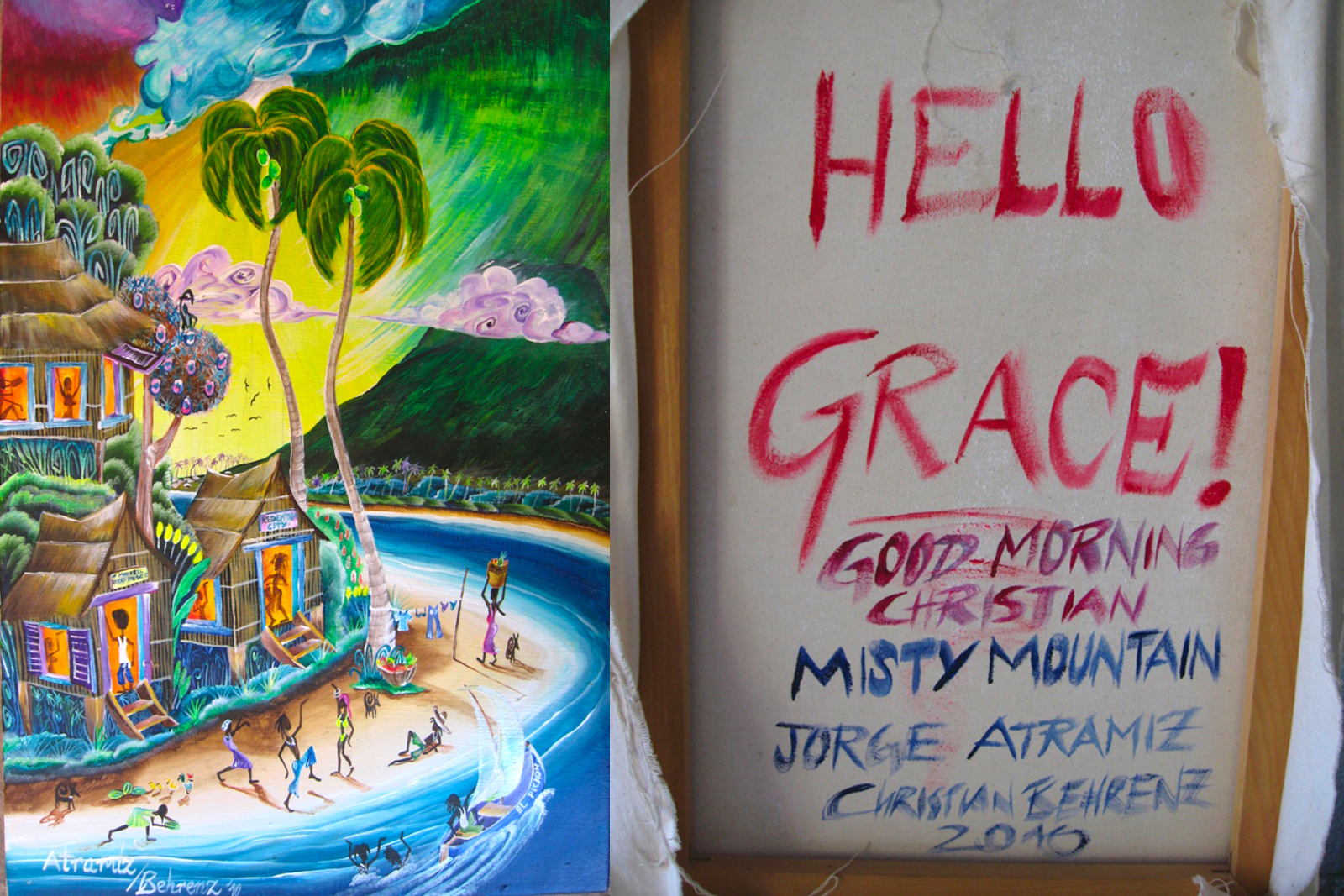 As soon as I received his message with the photo of the painting I took my time to see the beach, the people dancing and having fun, I imagined Christian among this crowd. Then paying more attention I noticed that one of the houses in the bay was named after a phrase I wrote in my notebook  long time ago and that became one of Christian favorites since he read it: “If you feel lucky you got it”.

Christian and I believe that concepts such as luck and fate , are just that,  a concept, they  are words created for lazy people who expect something that comes from outside  to change their life, every second is a new choice, so “if you feel lucky you got it”. 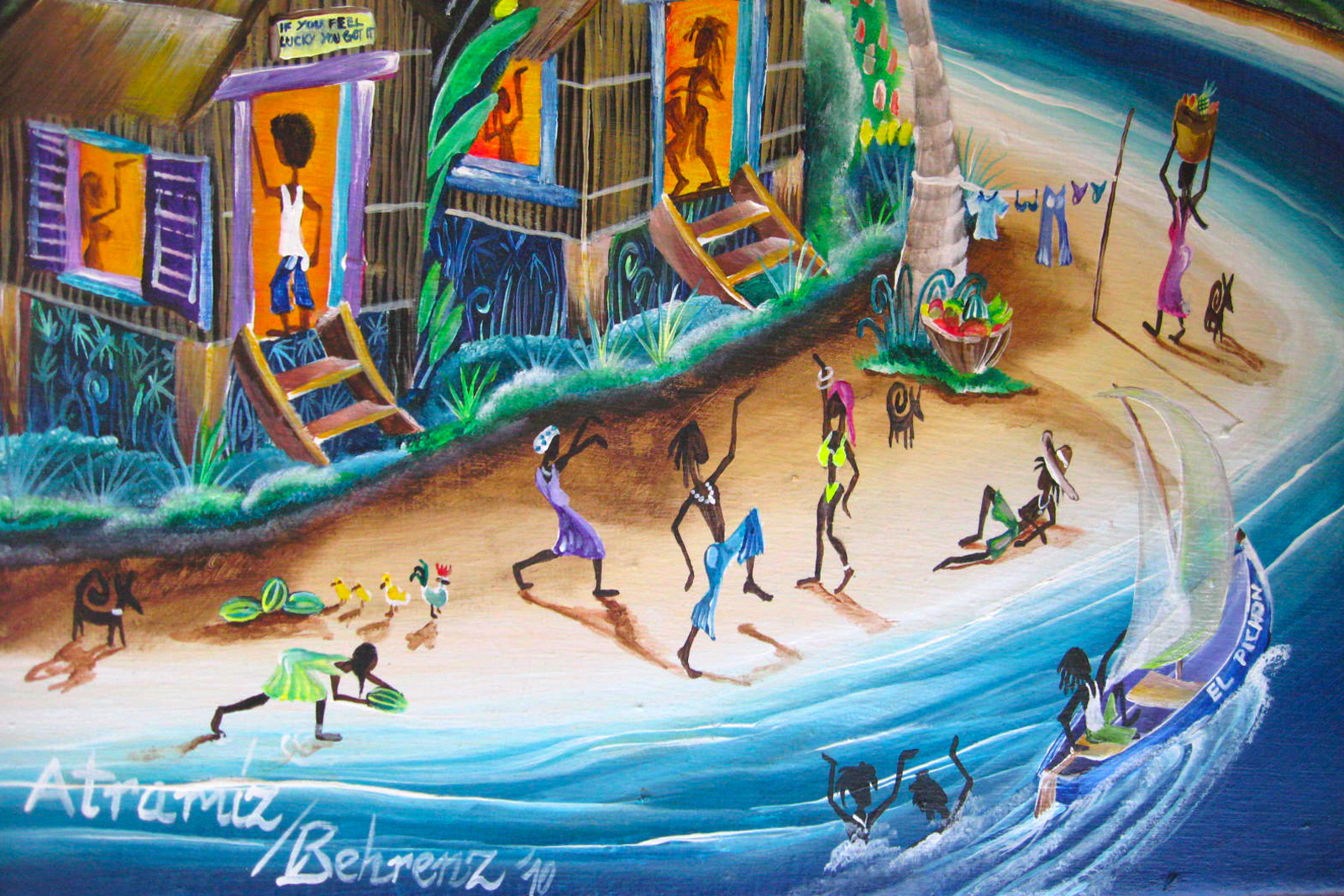 Come join us to celebrate life…

You can also see on the painting my boat “El Pichon” cruising in front of the beach.

I’m pretty “lucky” to have friends like Christian who take the time to finish important things like “The Mystic Mountain.”

I hope one day this priceless painting  have a price and I can get it from Christian to hang it on the main wall of my house. Thanks bro, I hope your sky looks always like that… 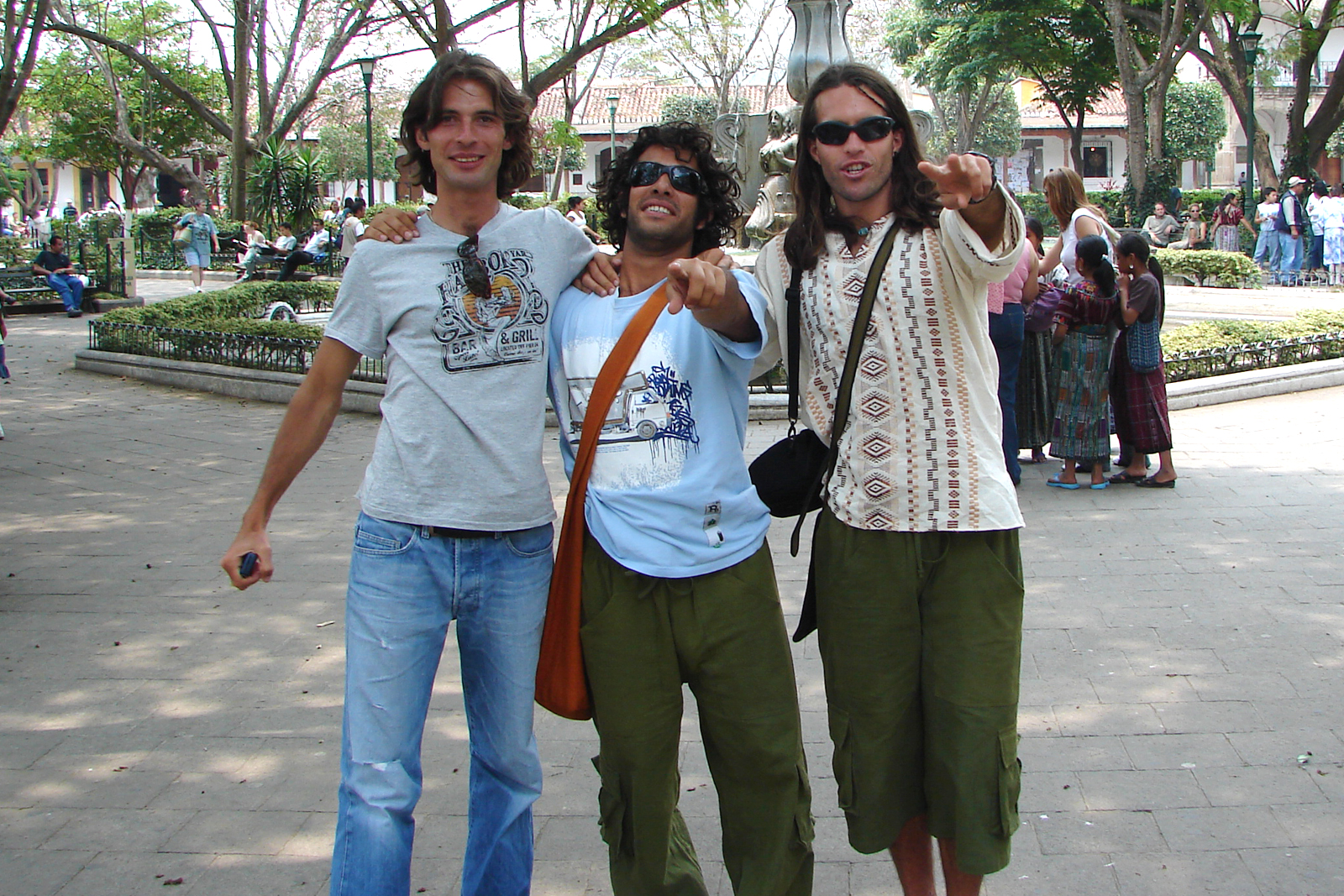 Yes You, we want you… Antigua, Guatemala